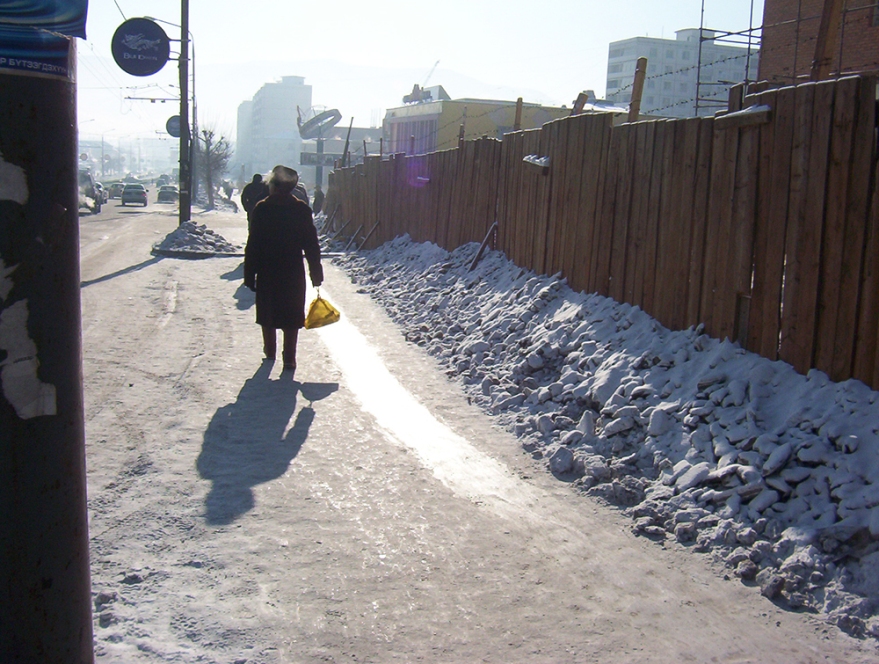 It started out as a shortcut. A quick jaunt across a snow-covered park to bypass a nastily icy intersection.

The park was on a hill with an ovoo – a pile of sacred stones – at its apex. One side of the hill was bordered by a monastery, one by a busy road, and the other by a frozen river. I was walking from the busy road, past the monastery to the river side.

Going up the hill was easy enough, as I trudged through fluffy white powder.

But the other side was criss-crossed with wide tracts of ice, polished to perfection by Mongolians sliding and skating across the snow in their shoes.

I must have looked uncertain as I stood there at the top. The old lady shuffling along beside me in her traditional red del (coat) flashed me a toothless grin. She stuck out her leather gloved hand and began leading me down.

We shuffled along until a passing monk pointed out a better route – one which didn’t end in a steep cliff. At the river bank she dropped my hand as if she’d suddenly remembered something important, and made a bee-line for the nearest ger.

I was just above the river, pondering how to cross, when a man in a suit ran past. He bolted down the bank, across the river, up the other side and out of sight before I could ask advice.

At least I knew where to cross now… but was it completely frozen? Would I sink if I shuffled too slowly? How long does it actually take to freeze to death?

A man walking on the opposite bank had stopped to watch me. He could see I was perplexed by the simple task and started walking towards me. He offered me his hand with a grin and lead me safely across the river and up the steep slope on the other side. I thanked him profusely.

What had been intended as a shortcut had turned into an adventure and introduced me to some of the nicest, friendliest people along the way. I love the Mongolian people for their generosity and openness and willingness to help others without question.