After a couple of days looking over horses and negotiating a price, we hired four horses and engaged Dureen’s relative Shijray as our guide. He had helped Dom and I choose horses the previous year and we already had a certain level of understanding and trust.

Jennie and I rode with Shijray for a week from Tsetserleg (Цэцэрлэг) to Bayankhongor (Ваянхонгор) via the Khangai Nuruu National Park. We rode a horse each plus a packhorse between the three of us. It was the season of airag (fermented mare’s milk) and many stops were made along the way at neighbouring gers to sample the local brew. Airag is an acquired taste with a slightly tangy off-milk flavour and is mildy alcoholic at about 3 – 4%.

Horseriding and alcohol are not always the best combination and I remember sliding forward over my saddle at one point going downhill when my horse suddenly stopped to avoid a marmot hole… Luckily it was a soft landing. 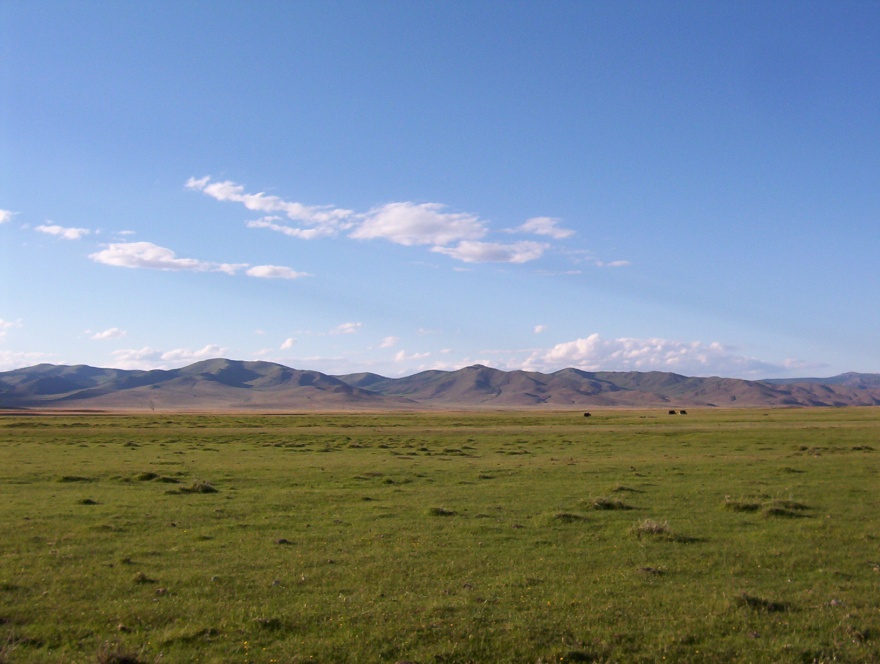 A big day of riding was about seven hours in the saddle. At night we collected firewood from nearby hills and cooked a dinner of pasta and tuna which visiting guests from nearby gers weren’t too keen to try.

The minivan from Ulaanbaatar (Улаанбаатар) to Tsetserleg (Цэцэрлэг) took 10.5 hours to cover 460km, nearly four hours faster than the previous year thanks to improved roads.

We stayed with Dureen’s family a few kilometres out of Tsetserleg where Dom and I had bought our horses the summer before. The kids remembered me and still laughed at my hat with the hole cut in it for my ponytail. All the local dogs made friends with me too, including Bankhar and Pannak.

Tsetserleg is the capital of Arkhangai aimag in central Mongolia and is a beautifully lush area with plenty of grass and wildflowers and abundant herds. The nearby Khangai mountains ensured ample rainfall during the warmer months which arrived as thunderous afternoon storms and solid downpours.

That night we shared a meal of innards stew as honoured guests followed by vodka nightcaps with Dureen’s dad before we slept in our tent outside. Being summer it was light until late and the kids were still playing soccer outside at midnight when dark had fallen, only to get up again at 6am to start their chores.

One morning I was taking care of my morning ablutions at the edge of the nearby woods, minding my own business, when a herd of cows passed me heading out of the forest and back to camp to be milked. The head cow was encouraging the stragglers to hurry along, when it stopped next to me squatting behind a tree. I could feel its breath as it glared at me. It thought I was part of the herd and should hurry up and get a wriggle on too!